We have a cute Dove story to share. Everyone who has ever stayed at Palm Creek knows we are inundated with Mourning Doves. In spite of the fact that their "leavings" can be a nuisance, they're still a pretty bird and are very entertaining to watch. Don and I went to get our RV out of storage and discovered that mama dove had made a nest on the top of our awning. Our first intent was just to pull down the nest and throw it away, but lo and behold, the nest contained a baby. Drat! Can't just throw away a baby bird!!! What do we do??

We left the nest in its spot and VERY slowly drove the RV over to our park model so we could get it loaded for our trip to Mexico. When we got here, mama was gone but baby was still in the nest so we very gently took baby and nest and placed them behind a tree across the street where it would be somewhat protected. We anxiously watched from the kitchen window and sure enough, about a half hour later, mama showed up and took care of her baby. Later that day, they both flew away with baby fluttering his best to soar. We don't know for certain that he survived, but our conscience was clear in that we did what we could under the circumstances. End of story. 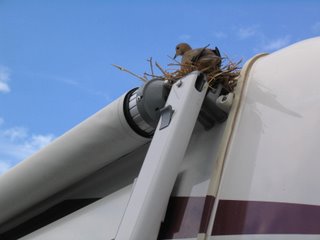 Speaking of bird stories: Our burrowing owls across the street from the park entrance are still there, alive and doing well. The construction has edged even closer to their burrow, but no one has harmed them or scared them away yet. Linda Balzan and I have been in touch with a Wildlife Foundation that will be in charge of moving the owls should someone buy the land for improvements. The Foundation promises to let us know when moving day comes so we can be there to take pictures. Before the owls can be moved, there is a mountain of paperwork and expenses to be paid by whoever owns the land. It will be interesting to watch and see how things develop. Will keep you posted with any updates.
Posted by Sue Hepler at 7:03 PM

More and more people are returning daily to our little acreage of heaven on earth at Palm Creek. The RV rigs roll in every day and the streets are more occupied with people greeting old friends with warm embrace. It's fun to watch all the new activity.

The village homes are still the highlight of conversation since so many of them are being installed. Folks are anxious to move in and I hear that sales are strong.

Happy hours abound for furry friends as well as humans. Here are a few shots from yesterday. Don and I sat out on our patio to have a happy hour drink. The fun part of living here is that everyone is out and active at this time of day and it's great when folks stop by to say hello. Good thing we have a lot of extra chairs. 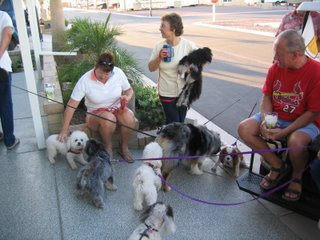 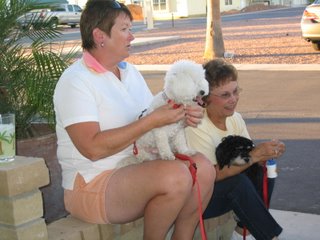 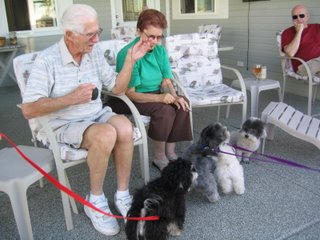 Halloween is in the air and there are some nicely decorated houses for the holiday. 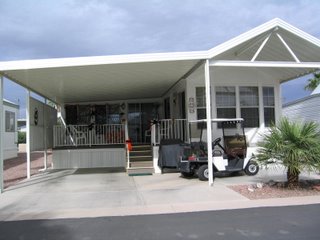 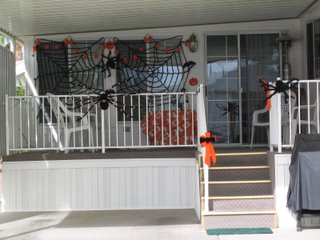 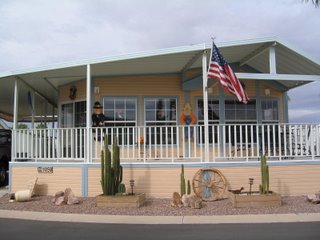 The golf course is in the process of being reseeded and beautiful colored flowers are being planted. It's amazing to watch how the new green grass springs back to life. Golf is closed for now as the new lawn emerges. Sure makes for a pretty sight. 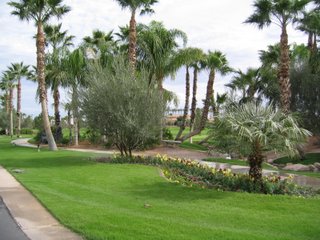 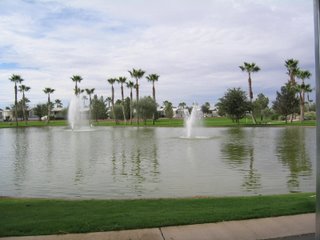 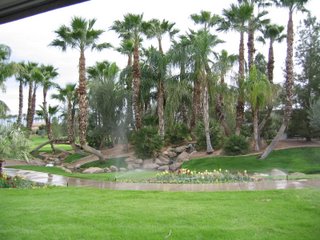 We had a short rain storm a couple weeks back that brought out a beautiful double rainbow for our enjoyment. Unfortunately, the photos sat in my camera as I've been lax at my updates again, but they're still worth posting. 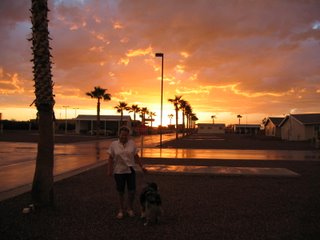 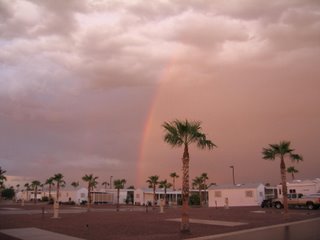 We have more news about the coming mall construction. We're going to have a 14 theater complex, Olive Garden, Applebees, Bed Bath & Beyond, Best Buy....and I can't remember the other stores that were listed but it sounds exciting. Anticipated completion is for late fall of 2007. That remains to be seen, of course, as we all know how construction plans can get delayed along the way, but we'll be waiting with open arms. Especially for that theater!!
Posted by Sue Hepler at 10:43 AM

Sad news for Italian food lovers....the very popular Johnny Carino's restaurant has closed. This was a chain of six outlets in the southern Arizona area and the major holding company went bankrupt. Hopefully, someone from the group will purchase the Casa Grande outlet and restart it under another name. This was a very popular eatery and will definitely be missed.
Posted by Sue Hepler at 10:05 AM

Good news for all Casa Grande residents and snowbirds! This article appeared in yesterday's Casa Grande Dispatch. Finally we get news about the big shopping mall heading our way.
_____________


The first turning of dirt for The Promenade at Casa Grande regional shopping center should begin next week, one of the developers said.

The million-plus-square-foot center will be at the northeast corner of Florence Boulevard and Interstate 10. It is being constructed as a partnership between The Pederson Group and Westcor Development Partners.

"Our contractor is preparing to pre-water the site and is mobilizing to start moving dirt next week," Gary Pederson, vice president of The Pederson Group, said Friday.

Pederson said a WDP representative would have more details next week.

The initial fact sheet for the project said, "The developer is currently attempting to keep the project on an aggressive schedule to commence construction in the summer of 2006 and open the project in the fall of 2007."

A major portion of the work was widening the Florence/I-10 overpass, which city officials said may have caused some delay because of its complexity.

Shortly before the Pederson/WDP announcement of the major center, a group known as Palm Creek Development said it would build a 264,000-square-foot center along Florence Boulevard in front of Palm Creek Golf & RV Resort.

In February 2005, shortly after the Pederson/WDP announcement, Rick Horwitch, principal partner of Palm Creek Development, said his group was not afraid of the competition from a larger project.

"By the time they're ready to operate, we're going to be up and out of the ground and full," Horwitch said.

More than a year and a half later, dirt has not been turned for the Palm Creek project. City officials said they had not heard from Horwitch's group and presume the project is dead.
Posted by Sue Hepler at 10:02 AM

Other Palm Creek Webs and Videos

Casa Grande has a very nice theatre in the downtown area. See their website for a list of upcoming events.
Paramount Theatre
Want to know what's happening in Downtown Casa Grande?
Visit this site:
http://www.cgmainstreet.org/index.php

Sue Hepler
Originally from WI, Don and I found ourselves stuck in OH with good jobs & raising 2 sons. We wanted to move but couldn't figure out how or where to find a new home. We finally called a realtor to sell the house & an auctioneer to sell all our possessions. Bought an RV & took off as full-timers for 4 years. Drove into Palm Creek to check it out and literally never left. RV is now sold & we plan to live here happily ever after. EMAIL: suehepler1707@gmail.com